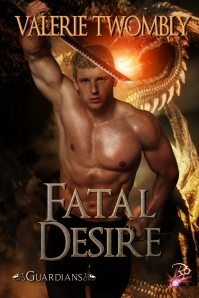 Caleb is dark, hot, and commanding in human form. As a dragon, he’s a force to be reckoned with. When he witnesses the slave Lileta being beaten by his Overlord Odage, he nearly comes unglued. Without understanding why, he asks to take the slave as his own, but soon realizes his longing is more than an attraction to a beautiful woman. In a sick twist of fate, the gods have given him a demon as his mate—one he can never touch unless he wishes his own death. His only choice is to grant her freedom.

Lileta wanted to kill Caleb, but when she is freed by this tempting male, her anger turns to a desire that can only prove fatal. Even if she could claim him as her own, her dark past makes her unworthy of his love.

When their paths continue to intertwine, spiraling them to the brink of passion, can they resist the yearnings burning within them, or will they submit to their fatal desire?

Book two of the Guardians Series picks up where Eternal Flame left off furthering the overall story by following Caleb and Lileta as they deal with their unlikely pairing.  The dynamic between the two is intriguing and propels the book forward with a lot of tension and teasing.

I dare say I enjoyed book two more than book one since I liked the characters a lot.  Something about Caleb really resonated with me.  I follow Valerie on facebook and I think book 3 is due out soon and I have a theory who the couple will be.