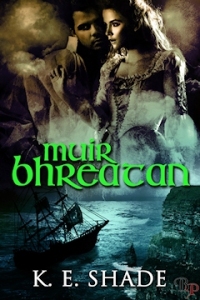 Aedan ó Loinsigh’s only love beyond the sea is his Kaitlin. Captured, he uses his knowledge of the seas to get back to his love. Liberators of gold from the British on the high seas, Aedan ó Loinsigh and his brother have never shied away from a challenge on the open waters. Aedan’s only tie to solid ground is the lovely Kaitlin who possesses him like no other. When the brothers are captured and awaiting execution, a mysterious man offers to free them if they pay off their debt aboard his ship. The brothers waste no time in agreeing to the proposal only to find their new lives are not much better than those of slaves. Desperate to reach Kaitlin again, Aedan must figure out a way to save not only the other indentured servants aboard the ship but get back to his true love. Salvation could come at a price. One that Aedan will have to live with for the rest of his life.

Muir Bhreatan by K. E. Shade is a fun short read.  It’s got love, pirates, revenge…  and more pirates.  😉 This was well written and seemed to be well researched (I’m not a pirate know-it-all). The pacing kept the reader engaged. I really enjoyed the brother’s dialog.  I could actually hear their yummy accent in my head.  I also thought their cussing was funny. My only concern is the name, although accurate, might be hard for people trying to search for the book.