I saw this on Jodie Llewellyn’s blog and thought, what the heck?  Sort of expands on the blog hop I participated in a week ago.

Typed.  I can’t write as fast as my brain works but I can type fast enough to keep up.  Additionally, my hands cramp after a short while.  Perhaps I should create a font from my own handwriting?  😉

When I do hand write something, it’s actually a hybrid of both cursive and print.  I read somewhere that’s a sign of a highly active mind.  I’ll stick with that.  😉  Also, my handwriting starts off really neat and consistent.  Then as my hand gets tired, it begins to look like a doctor’s scrawl…

3. Show us your favorite pen. 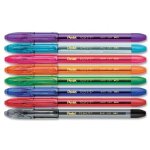 Some writers are pen fanatics, not me.  I like the RSVP line of pens because I can get them in several colors, purple being my all time favorite.

I’m a Post-It fiend.  I have some heart shaped Post-Its I’m in love with at the moment.  The crazier the shape or paper pattern, the better.

I have a writing nook I created specifically for writing.  I tried doing a write in once at a friends house but it wasn’t my nook so I got too distracted.  My nook is for writing and I write in my nook.

5. Who are your five favorite authors in terms of authorial style?

Five?  UGH.  Lets see, I wrote a post a while back that covered my 3 Favorite Books which listed Tamera Pierce, Peter S. Beagle, and Kresley Cole.  To round out my five…   I also really enjoy the works of Jennifer Roberson since her sword dancer series features a really strong female lead.  Meredith Ann Pierce Dark Angel Series featured an unlikely heroine who end up making the ultimate sacrifice.

6. What are you your three favorite books on writing?

I don’t actually have any favorite books on writing.  Most of my research has been articles online and reading works by other writers in my genre.  There is a lot of free info out there on the craft.

7. Have you ever competed in NaNoWriMo?

Oh yeah, every year.  I haven’t attempted the Camp NaNoWriMo though, just the competition in November.  I sort of depend on the competition for my drafting.  I need a crazy deadline although I’m getting more disciplined now that I’m serious about making a career change.

8. Have you ever won NaNoWriMo?

6 times.  🙂  I’ve participated in the last 9 NaNoWriMo competitions.  Stealing the Wolf Prince was my first win.  🙂  I even wrote the sequel, Thieving the Bandit Lord, during NaNoWriMo.

9. Have you ever had anything published?

Yes, I have a short story, Unrequited, available on Amazon.  I had an article and a poem published in 2007 through an online magazine, now closed as well.

10. What projects are you working on now?

11. What is your soundtrack to writing?

I have a playlist on Spotify that I listen to while I write.  The list of artists include Daft Punk, Deadmau5, Kaskade, Ellie Goulding, and Chris Lake.

Right now my go to song is Ghosts’ n’ Stuff by Deadmau5 & Rob Swire.  The Nero Mix is really good too.

2 thoughts on “Writing Habits: A Questionnaire”